At the end of Namibia: Part 1, I left you on the edge of your seat. That’s just a fact. Our attractive, resilient and, above all, humble protagonist was tip-toeing around cow brains in Namibia’s sprawling Katatura Township, two days into a week-long African adventure with no clothes, no money and – let’s be honest – no idea. Undoubtedly, many of you will have been struggling to function normally over the past five weeks, plighted by this single, poignant thought: “What ever happened to that sarcastic guy who uploads photos of himself in primary-coloured briefs on his weird blog?”

Thank you for caring. Here is your answer.

The day after visiting the Township, it was time to take a bumpy, sweaty six-hour bus journey to the middle of nowhere with a group of strangers. This was for a three-day hiking excursion. We would be spending a few nights together, so I decided to inform my travel companions that my suitcase was lost in transit; that’s why I’d be wearing the same outfit day-in, day-out. No big deal.

Of course, everyone on the bus was a mature professional, many were experts in their various fields, and all were visiting the country for a conference (which I was also attending) that would shape the face of adventure travel globally, so they reacted exactly as you’d expect.

They made fun of me aggressively, relentlessly and unashamedly.

I bought the hat at a petrol station

Top five jokes to make about someone who has lost their suitcase in Africa and has to wear the same clothes for a seven-day adventure holiday (admittedly, this is a pretty niche top five):

1. “Nice top! Is it new?”
2. “OK everyone, make sure you grab your luggage when you get off the bus. Not you, Simon.”
3. “Your trousers look familiar, have I seen them somewhere before?”
4. “Where did you get those clothes, the toilet store?”
5. “Are those women’s socks?”

The last one wasn’t really a joke, more a fact.

I only had two pairs of socks and by day five they were kicking up a stink worse than Katie Hopkins on everything she has ever done. I had attempted to wash them in the sink at my hotel-cum-hostel-cum-shittip (which I will tell you about later), but, predictably, the water cut out. I decided to buy some fresh ones with the few Namibian dollars I had left and ventured into the town of Swakopmund, where I was staying after finishing the hike.

Guess where I ended up? That’s right! Good ‘ol Edgars, again! (that’s the African Debenhams I mentioned last time for those of you who can’t remember every detail of a blogpost you part-read over a month ago). Yet again, when every other store in Namibia failed me by closing at irregular hours, Edgars was there, poised to help an old friend in need. But this time I was to make a Faustian deal. With the demand for men’s socks in the African town of Swakopmund reaching global highs, making international headlines along the way, the store had completely sold out. It was women’s or nothing.

As you’ve probably gathered, I’m not a proud man.

Baby blue was the manliest option, I swear

So, I had just treated myself to three pairs of fresh socks, it was the last day of the conference and I was feeling about as good as any person in my position could, especially when they’re staying in a hotel that:

a) Doesn’t replace the bar of soap after each guest
b) Requires guests to hold the shower nozzle above their own head
c) Constantly prompts questions along the lines of “what’s that stain?” and “why am I here?”

I decided to have a few drinks. I thought I deserved it. A few hours later, I found myself sitting on the floor of a Namibian nightclub wearing a cowboy hat and bright yellow women’s socks, watching a group of Germans dancing – somewhat efficiently – to Gangnam Style whilst waiting for a 5am coach transfer. As you can imagine, that bus ride was lovely.

There was one redeeming feature, however, in that I got to see the sunrise from the peak of Dune 7. Which was actually pretty cool.

Fun Fact: A sand dune is much harder to climb than you think

Having said that, on the obligatory ‘run down the dune’ I managed to get positioned behind someone who clearly had shovels for feet. After the Namib desert had been fully emptied into my face, we got back onto the coach and made our way to Windhoek, Namibia’s capital city. It was here that I needed to visit the local police station to file an official lost luggage report and claim expenses back from South African Airways’ headquarters.

Entering the police station was chaos. There were people everywhere, jostling in non-existent queues to get papers signed by uninterested officials, sitting behind desks protected by great prison bars reminiscent of 19th century jail cells. The painted walls were peeling, the screaming was unsettling and there was confusion. I asked a lady in the queue what was going on with the lines, and she said: “It doesn’t matter what’s happening here, you just don’t want to be in there.”

With her annoyingly unhelpful answer, she pointed to a heavy steel door; that of the holding cell directly to the left of the station’s entrance. The policeman on duty had lost the key and was throwing official papers through the letterbox-shaped hole with disregard. There could be up to 20 people in a cell made for eight, and criminal suspects can be held there for years.

After two hours of not moving, I asked the rudest woman in the world at the front desk – who told me to queue up in the first place – whether there was a quicker way to get my form signed. With a disgruntled tooth kiss, she signed it on the spot. What a lovely woman.

Anyway, I’m waffling and this blog post has gone on long enough. I’m just going to list the last few incidents worth mentioning because it will take too long to go into detail and life’s too short.

Other things that happened worth mentioning on my trip to Namibia:

1. Almost getting stabbed by a beggar with a scalpel
2. Three separate people trying to sell me the Word of God. “I don’t even want it for free,” was my response.
3. Seeing a woman fully face-plant a bar stool in a German-Namibian bar. I mean fully. Bleeding nose and everything.
4. Meeting Tim Cahill, one of the most prominent travel writers of his generation.
5. Shooting a rifle for the very first time at a hunting lodge and actually hitting the target.

Seriously, I got a bulls-eye. 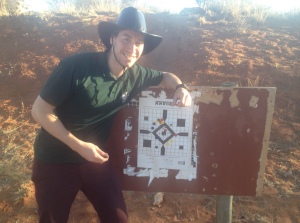 I’m not joking. A man wearing women’s socks got a bulls-eye. It’s not something you see everyday.

So that’s that. Namibia done. I can finally move one. Make sure you read my next post when I’ll tell you all about my first experience in a Dubai hospital after getting a chunk bitten out of my head. Don’t worry, there are plenty of pictures.