Although the main reason that this post has taken over a month to write could easily be blamed on the fact that I’ve been playing Grand Theft Auto in my pants, the last four weeks have actually been pretty hectic. For starters, shortly after my last blog post, I experienced my first sand storm.

Oh, hang on. No. It was nothing like that.

I mean, it was a bit orange, people did crowd at office windows and there was some wind, but it was pretty much the adult equivalent of getting excited about a dog in the playground. Sure, it doesn’t happen every day, but it isn’t going to change your life (disclaimer: a dog in the playground is awesome and may change your life). This was literally the most intense photo I could get and it looks nothing like the head that chases Brendan Frasier in The Mummy. 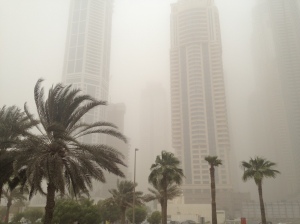 Speaking of The Mummy, my parents were visiting last week and we decided to go on one of Dubai’s famous desert safaris. This is something I have been looking forward to since getting here, so I was feeling pretty pumped. We were picked up in a Land Cruiser and made our way into the sprawling Sharjah (one of the other Emirate states) desert. If I have one major piece of advice, and this is speaking from experience, it would probably be “avoid drinking half a litre of Coke before going dune bashing.”

Let’s put it this way, after our expert driver had tackled the first few mammoth dunes, things were certainly churning. As part of the package price, the safari also included a trip to a desert camp. This is where we would witness what turned out to be the most surreal interpretation of “traditional Arabic entertainment” imaginable. I mean, I’m no expert but I’m pretty sure that a man wearing a skirt made of multicoloured LEDs that flash as he spins to the point of vomiting doesn’t reflect the simple life of ancient Bedouins.

Then again, I got to ride a camel. So who cares, right? 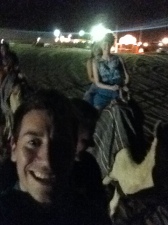 1. When boarding said camel, roundhouse it in the hump.
2. On the second attempt, repeat above step.
3. Be one of two fully grown men on its back.
4. Accidentally stand on its hoof(?) when disembarking.
5. Touch its face.

Just to clarify, I didn’t intentionally kick a camel. My shorts were too tight which restricted my leg swinging ability. In a way, I’m probably one of the few people who can say they’ve done it. I don’t regret a thing.

Another part of the excursion included sand-boarding, an intense, athletic pursuit in which lean extreme sports enthusiasts fluidly tackle some of the desert’s greatest natural landmarks. In theory. Anyway, my dream of becoming Arabia’s Tony Hawk was dashed when I found that the snowboards we had to use were broken. When I eventually defied the laws of friction-based physics and got down a dune my face pretty much touched a scorpion, so that was that.

Then again, I got to dress in a traditional Emirati Kandora. So who cares, right?

Don’t even pretend it doesn’t suit me

Moving from the “traditional” to the extremely modern, I also took my parents to the 123rd floor AT.MOSPHERE bar at Burj Khalifa. This offers some amazing views over Dubai’s futuristic cityscape and is the perfect place to watch the sun set over the azure Arabian Gulf. What was my dad’s favourite part you ask? It was video recording the floor-counter in the lift. I’m pretty sure he got enough footage to splice together the world’s most boring feature length, elevator-based epic. It’s a niche market.

This is pretty much the end of this blog post now, so I thought I would leave you with one final parent-based anecdote that I think warrants sharing. On a visit to Jumeirah Beach Park –  which really offers much less ‘park’ than the name implies – my dad was coming out of the sea to meet my mum on the beach. Watching from a distance, I assumed he would do the classic Daniel Craig in James Bond exit.

Instead, he opted for his ever-tasteful Vito Spatafore walk from The Sopranos. He later admitted pretending to be disabled when walking to his car once because someone caught him doing it and the shame was too much to bare. The first few seconds of the video below should give you a good idea why.